At the British Roller Ski Championships at the Olympic Park, London, on Saturday 7 September, the Robert Hovey Trophy was presented to George Gabriel for his work in developing young skiers.

Robert was a founding member of Lakeland Cross Country Ski Club and carved the trophy from a fallen tree in Dallam Park, Milnthorpe, in 1993.

The trophy is awarded by the Snowsport England Nordic Committee to individuals and organisations which have made an outstanding contribution to cross-country skiing in the UK. 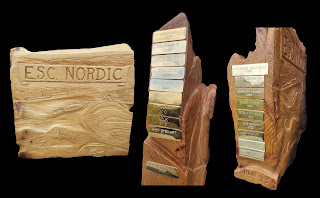